S/V Take It Easy is a Saint Simons Island, Georgia based 2014 Lagoon 39 Catamaran For Sale By Owner. Pack Your Two Piece, Grab Your Straw Hat and Flip-flops and Climb Aboard – S/V Take It Easy is Fully Equipped for Extended Coastal or Blue-Water Cruising. This is an Owners’ Version with 3 cabins and 2 heads.

Purchased in March 2016 from the original owner. As owners, we are full-time live-aboards cruising the Caribbean Sea and US Eastern seaboard for nearly seven years. Never in charter. No hurricane damage. We’ve included boat photos of our favorite anchorages, from Grenada to Maine and many points in-between.

Lagoon Catamarans is the world leader in sailing catamaran cruisers. The key strengths of the Lagoon 39 are: its good design, high-quality construction, and better-than-average performance. The 39 is a catamaran used specifically for cruising.

Equipped as a cruising catamaran the 39 proves extremely popular – both with long-term liveaboards and casual coastal sailors alike. The boat appeals on several levels. It is by design intended to be easily and efficiently handled offshore and yet it is still extremely comfortable. The 39 provides intriguing options that neither the 380 nor 400S2 offer. The 39 is a serious cruising machine, especially the new single-handed rig arrangement.

The entire starboard hull for an owners suite with a dedicated stateroom that can be closed off for privacy from the central saloon via a sliding door. Light-colored woodwork and an abundance of natural light streaming in from the windows gives the illusion that the interior of the boat is more of a beach house than a catamaran. Access to battery switches and engine, circuit breaker for inverter, electric winches and solar panels and windlass in the inboard storage cabinet.

The raised helm station to starboard is the command center for handling the 39. All sail controls, led though clutches, wind up at an electric winch, making the boat easy to handle. The deck organization that allows for the traveler and mainsheet to be efficiently trimmed from this position, which is well forward of the traveler, is quite clever. Not surprisingly, the view from the helm station is excellent, both when sailing and maneuvering under power.

The first thing you notice about the side-decks is that they’re wide and easy to navigate. The second thing is that the numerous hatches are all neatly recessed. There’s plenty of deck space of course, and lounging on the trampoline or forward pulpit seats is a nice way to watch the ocean roll by. The forward bridgedeck includes two large lockers, one is a chain locker.

The quality of the design means that your cruise, no matter what speed, will be smooth and enjoyable. In addition, the 39 is very simple to control and can be done so by even a novice sailor with little skill, but the more you know the more at ease you will be with this catamaran.
Bringing the boat alongside the fuel dock, owners are reminded how widely spaced twin engines make docking a cinch.

It is a delight at anchor, being far less prone to rocking about in the swell all night, and the deck saloon means that no one misses what is going on, whether inside cooking or outside relaxing.

I probably shouldn’t admit this, but the 39 is a boat that an old monohull sailor like me, I intuitively understood. 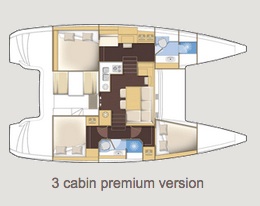