Asking: $295,000 (USD) Location: Fort Lauderdale (Florida)
S/V Sea Monster is a Fort Lauderdale based 2005 Leopard 40 Catamaran For Sale By Owner
This catamaran owner requires financial settlement only. Trades will not be considered.

S/V Sea Monster is a 2005 Leopard 40 Owners’ Version by Robertson and Caine and is for sale by owner. This is the highly sought after owner’s version layout and has never been chartered! The 3-cabin layout features an owner-dedicated starboard hull with master stateroom, office area and large head with separate shower forward and a berth in the forepeak. Guest accommodations include 2 double cabins and two large heads with separate shower stalls.

She has had 3 separate loving owners since exiting the factory in Cape Town, at which point she was sailed over to the United States under her own power. We (current owners) have been living aboard, exploring the Bahamas and Eastern Caribbean since early 2019. She has continued to undergo diligent, routine maintenance and has been outfitted with lots of upgrades. We love exploring, but also work remote, so maintaining both functionality and accessibility has been of upmost importance.

The Leopard 40’s speed on the water and easy handling are its top features, earning it “Boat of the Year 2005” from Cruising World and SAIL magazines. The designers, Morelli and Melvin, are known for producing solid cruising boats. Despite having smaller engines, Sea Monster averages 6-7 knots whether under sail or power, though higher speeds are often achieved! All lines run to the helm where two winches (one electric) make single-handed sailing a breeze. The helm seat position keeps the captain feeling like they are part of the action whether it be lively cockpit chatter or close proximity to the galley while underway. Sliding doors allow for indoor/outdoor living in paradise.

The upstairs of Sea Monster is bright and comfortable with a homey “living room” feel, but easily converted to a traditional dining space when eating inside is preferred. The light cabinetry give the space a more modern feel and the U-shaped galley provides for stability while underway or at anchor. The 16K BTU Air Conditioning unit provides cool air (or heat) to the salon and aft cabins to keep everyone comfortable.

The power/battery system underwent a large upgrade in 2021 when the boat was converted to lithium iron phosphate (LiFePO4). This included installing a 900 amp hour house lithium house bank, a new Victron Multiplus 3000 charger/inverter, and a Victron smart setup between all charging sources.

This boat is already set up for long term cruising. 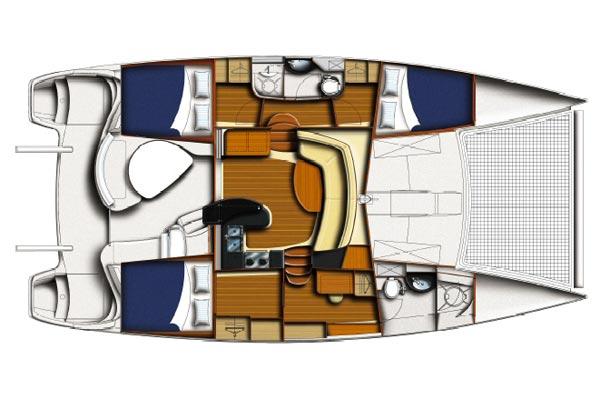