Price Reduced! $265,000 (USD) Location: Rio Dulce (Guatemala)
S/V Sparklefish is a Rio Dulce based 1999 Leopard 45 Catamaran For Sale By Owner
This catamaran owner requires financial settlement only. Trades will not be considered.
This seller is open to offers via CatamaranSite escrow.

S/V Sparklefish is a 1999 Simonis Voogd designed 45’ Leopard catamaran with 18” extensions professionally added on to her sugar scoops. She was built as a crewed charter vessel, and served in that capacity under the previous owner for 17 years -never bareboat chartered. She was damaged during Hurricane Irma, and professionally repaired in Tortola thereafter, including new transom extensions, Genset, Mast, Crossbeam, Rigging, and paint. The boat has been subsequently surveyed and sailed extensively for over 4 years, with numerous upgrades throughout. Over $20k in upgrades in the past 12 months, plus normal maintenance. The result is a superior boat in better shape than the vast majority of her peers.

A quantum leap in catamaran design, the Leopard 45 offers space, style, simplicity and speed. The layout allows easy movement about the boat from the spacious aft deck, a step down to the swimming platform, or relaxing on the foredeck trampoline. The innovative deck layout brings a host of features to make life and sailing simplicity itself. From the aft deck arch that puts the mainsail sheeting system out of harm’s way, to the ingenious anchoring system, sailing the Leopard 45 is a breeze. The Leopard 45 was Cruising World Magazine’s charter boat of the year when it was introduced in 1997.

Sparklefish is a 4 head and 4 cabin layout, with a spacious salon that opens through large double doors to an expansive cockpit that merges the outdoors with the boat’s interior. The Galley is up and has all the amenities and space to satisfy the most demanding gourmet chef. Ample work surfaces and locker space for crockery, cutlery and all cooking utensils.

The crewed charter versions of this boat were built to a higher standard of interior appointments, and carried additional capacity in tankage and refrigeration among other differences from the bareboat version of the design. The hull extensions make swimming and snorkeling far easier, and lend a bit of speed and stability to the boat.

You will be impressed with her speed and meticulously-kept interior. The Leopard 45 has received numerous accolades since the model’s introduction due to her open and spacious layout, easy handling, functional galley-Up layout, four spacious staterooms with double-size berths and generous headroom throughout.

Built of GRP to robust scantlings, she is cored above the waterline, and solid along her keels and attachment points. These boats were built strong, but have a reputation for sailing fast.

She has been well-maintained and is currently cruising in Rio Dulce with a full-time family who consider her home and have fitted her with everything required to cruise in comfort and speed with a family of four. Captained by a former pilot, her systems are maintained to high standards and upgraded or repaired when required. She is currently undergoing some upgrades and normal maintenance and is ready to sail away from this convenient freshwater location.

Sparklefish is a fast cruising boat, averaging over 7 knots in intermediate wind, and holding 8-9 reaching or running downwind in moderate air. Her large engines allow over 700NM of motoring range. She will motor at 7 knots on one engine at 1.5gph, and 8.5 on both. 6kt will reduce fuel burn to less than 1gph. Her large winches are supplemented by a mobile power drive to raise the main or davits.

She reefs and tacks easily and is extremely maneuverable. Upgraded systems make sailing and living aboard a comfortable and modern experience. Sparklefish is ready to continue cruising right now. Her current owners are taking a cruising break for the kids to return to land school for a few years.

Located in the Dulce River, between Guatemala’s largest lake, Lago Izabal, and the Caribbean Sea. 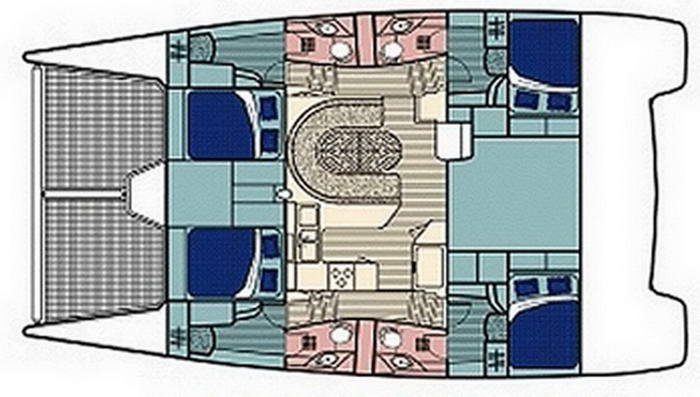