Asking: $220,000 (USD) Location: St Mary's, Georgia (USA)
S/V African Dream is a St Mary's, Georgia based 2003 Voyage 380 Maxim Catamaran For Sale By Owner
This catamaran owner requires financial settlement only. Trades will not be considered.
This seller is open to offers via CatamaranSite escrow.

We are selling African Dream after an amazing trans-Atlantic crossing, as a family of four. With just a 53ft mast, this allowed us to cruise the southern Inter-coastal waterway for three months, going ‘outside’ when we chose to. AD is a 2003 Maxim 38, with extended sugar scoops (by Glyn Buckle the boat builder) – an amazing modification for so many reasons. Alighting the dinghy or landing fish, we wish this addition on every boat (3 feet of additional waterline).

Situated in St Mary’s boatyard, Georgia, USA (in dry storage for the hurricane season), viewings can be easily arranged. AD has two Yanmar 3GM30 29HP motors with 2500 hours each. A Cummins Eon 9 Kwh generator with 900 hours, which provides enough AC power to run the watermaker, washing machine, air-fryer and domestic air-conditioner simultaneously.  Three cabins with two electric heads and hot showers on demand, have been a pleasure. The saloon has a collapsable table, which converts into the “Cuddle Puddle” for watches, when we are on passage. 1000W solar, 600Ah LifePO4, Airmarine wind generator, these allow us to operate our television, router and live comfortably, without having to run the motors to recharge batteries. The 40 gallon per hour, AC driven water-maker has been amazing. We have not drawn water from the shore in 18 months – it has a spare new membrane which we never used. The Raymarine E-90 radar has announced many squalls. And the Evolution 1 Autohelm has steered us over 7000 miles maintenance free. AD is a solid boat, safety equipped A Category built for South African waters.

We chose a Maxim for our family because of its safety record and fantastic build quality reputation. The sails are not new but they are fit enough to cross an ocean. There is an excellent condition white Spinnaker in a sock (see the video). We crossed the Atlantic from the East Coast of South Africa, around Cape Point and reached the USA at an average speed of 6 knots. Much of that was under sail (Spinnaker). Equipped for long range passages, with a range of 800Nm on diesel fuel propulsion, there’s also a great deal of motor spares included. The motors are clean, well maintained and cared for. New Ellebogen engine mounts were fitted three month ago. 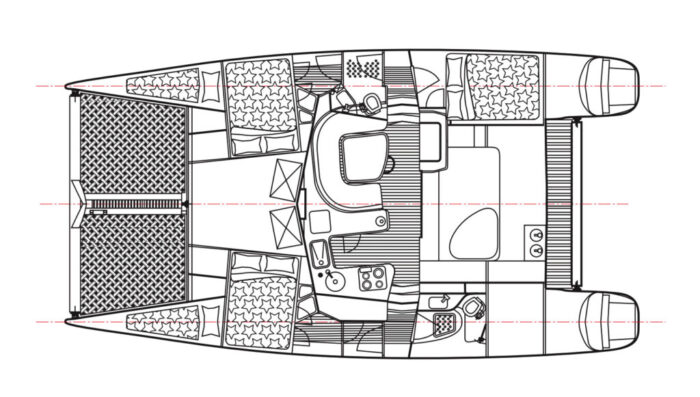