Asking: $110,000 (USD) Location: Titusville (Florida)
S/V Tuvalu is a Titusville based 1998 Prout 37 Snowgoose Elite Catamaran For Sale By Owner
This Boat Owner requires financial settlement only ... trades will not be considered!

S/V Tuvalu is a Florida based 1998 Prout Snowgoose 37 Elite Catamaran for sale by owner which is ready for extended cruising and comfortable liveaboard. She is a safe, strong, seaworthy and easy to handle catamaran. This is a very clean and well kept boat. We sailed with our son and the three of us had enough room to live together comfortably. Tuvalu has lots of storage , we even carry 3 foldable bikes with us. The wide and solid foredeck is perfect as it’s a nice place to sit or sunbathe.

This catamaran has two furling staysails (cutter rig). The hull was built in 1998 and was launched 6 years later, when all works were finished(electrics, plumbing, furnishing, etc.). It has got special insulation and double glazed windows , the interior is oak.

The Prout Snowgoose is one of the rare catamarans that can be found in ports around the world and cost less than $200,000. Built in the UK for the turbulent North Sea, they were recently named as the second best used cruising boat by Cruising World (“9 Best Used Boats for 2017”). Cruising World also named them among the catamarans best at holding their value (August 2002 issue), and CatamaranSite ranks them the number one recommended cruising catamaran under 40 ft.

This Prout catamaran is German flagged, and has sailed from Europe to the US, Bahamas and Canada. It has a watermaker, wind generator , solar panels , a Newport by Dickinson heater with chimney, so you can go everywhere, north or south!

Currently, the boat is docked in Titusville, Florida (Cape Canaveral) just 45 miles east of Orlando, FL. This is a two owner Yacht which has never been Chartered and we are the second owners!

We live in Germany. If you want to contact us by phone , we will provide you our German cell phone number which you may call either via Skype or WhatsApp. Otherwise it might be to expensive !!! 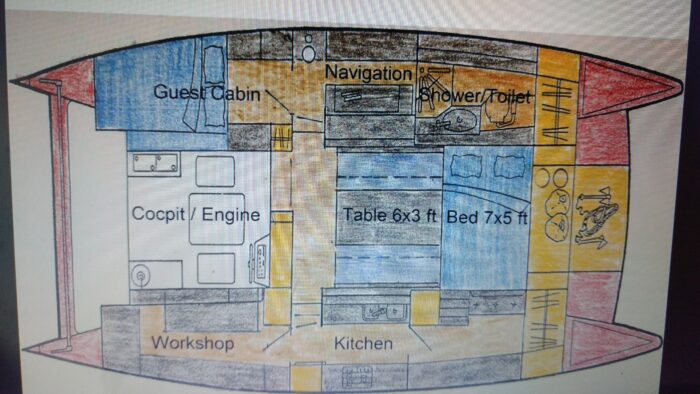 Catamaransite.com offers the details of any vessel advertised on it’s website in good faith but cannot guarantee or warrant the validity of this information nor guarantee the condition of any vessel. This website is not responsible for the actions or the non actions of any boat owner.

From time to time it is possible that a boat will be listed here by a boat broker. Brokers are responsible for the accuracy of the boat information presented in their advertisements on this website. A buyer should instruct his surveyors, or his agents, to investigate any boat details as the buyer desires inspected. These vessels are offered subject to price changes, prior sale, or withdrawal without notice.