Gemini Catamarans have gotten a reputation among sailors as a cheaper cruiser with a gift for sailing to wind. But it has been my experience that no catamaran goes to wind well and to compare cats on their windward performance is like picking a gold medal winner in the 50 yard dash from a field of sloths. Gemini is no different than any other cat I have sailed, but what they lack in performance and style, they make up for in affordability and modability.

My first mate, Matt entered into the world of Catamarans when he found a used Gemini 30 in an estate sale in Connecticut. I joined him for the 12 hour drive from North Carolina to offer my expert opinion and eye for deals and when we came upon this one what a deal it was. The gentleman who owned it had passed and there was a storage unit full of extras and a yard bill that the family didn’t want to pay. In late October and November yard bills come due for winter storage and great many deals can be had when the yard starts putting thumb screws on the owners to pay up.

Matt scored this boat for a budget price of $8500 and that left plenty over to refinish the boat when he got it trucked back to North Carolina. Digging in, he found a great many sins in the boat where quality corners were cut and cost cutting combined with weight control, left a decided flimsy boat that as Matt says, “ is perfect to sail from Maryland to the Carribean and that’s about it.”

Built in 1985, Matt’s boat was laid in Mayo, Maryland at the Gemini plant. Designed by British Boat Builder Tony Smith, it was the second generation of the vessel with four designs total made from the same mold, the 3100, 3000, 3200 and 3400- but with different designs. This one proved to be no match for ages as the years were hard on this girl. Matt found lots of rot and mold that needed to be cut away where water intrusion compromised the soft goods like head liner and wall coverings. Bulkheads and deck joints were peeling away where glass was improperly laid up and wood coring rotted away. The wood cored top side had a few soft spots that gave the boat a flimsy feel and he found a ton of opportunity to stiffen up seams and joints with some judicious use of mat fiberglass. Once the loose joints were resecured he went to town with paint and gave the boat a whole new fresh feel and clean smell, even if it had lost all the charm that the builders intended.

The 3000 has a decidedly light feel to the boat and gives a sailor pause before taking it out in any heavy breeze, but Matt enjoyed overnighting on the vessel while cruising the inshore waters of the Neuse River down to Beaufort. The boat was heavy enough to handle some of the more intense Ocean breezes, but light enough and shallow enough to gunk hole in the swamps and hiding holes of East Carolina.

For storage and liveability this boat came in dead even because it’s original design lacked a certain quality with the rotten headliner and failing bulkhead joints and time had taken its toll. After gutting the thing, he made it his own complete with wine-filled Marty Moose Mugs and Jimmy Buffett tunes blaring at 2 am on the dock. What it lacks in polish, it makes up with Matt’s unique style and by focusing on the functionality of the boat he made a seaworthy vessel that serves him well. He found convenience in the 9.9 honda outboard at first that pushed the boat just fine while saving on gas. He tells me, were he to do it all over again he might scrap the fiberglass cockpit cover but I personally like the cover as it gave great protection to the helm and created a warm place to ring in the New Year last winter when I last visited.

There were no major frills on this boat and the sail plan was entirely average with a genoa jib and standard main. It made great time downind on a reach but labored to go windward higher than 60 degrees like most cats. It’s deck design and talent for downwind sailing, made for a very comfy sail with minimal hobby horsing And the low profile cabin top made traversing the hard shell trampoline that spans the hulls to douse the main quite easy. While she won’t win any races, she’s a good cruiser downwind and comfy enough for even a young family who is looking to head out together on a budget.

Gemini built a ton of these ladies in the 80’s when the dollar was strong and the boats were flimsy. But 30 years later the headliner was shot and the decor distinctly dated. Matt enjoyed tearing it all out down to bare fiberglass and eventually chose to scrap the standard Honda for an equally old but more reliable four stroke Envinrude. And he was just out this past month in 30 knots of breeze where he says waves were crashing over the bow and the boat was flexing like an accordion. He said it was so bad even the dog got scared, but he made it back in time for work and credits Gemini for building a boat that won’t take you to Fiji, but is enough to help you keep your sanity while you socially isolate.

All told, the Gemini 3000 is plentiful on the used US market with 500 hulls made in Maryland from 1980 to 1996. A new boat will run you considerably more than a used model which can be found for as low $3500 for the truly ambitious DIYers. But if you’re into the new ones, you will be forced to spend a ton more money and buy five more feet because they discontinued the 30 late last century. The Gemini 30 however is “great weekender plus” says Matt and for the money, you won’t find a better entry level catamaran for the newly inaugurated sailor looking for a used vessel. Thanks for reading and do well, have fun and sail far. 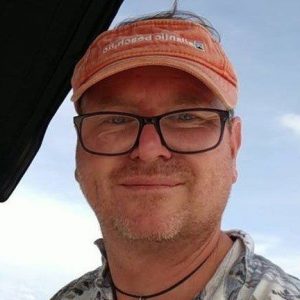 Capt Chris German has taught sailing for more than 25 years with NauticED and US Sailing. He has delivered boats from Maine to Florida and taught thousands of students from beginner to 100 ton Captains to coaching Olympic Hopefuls.