Can you tell us a bit about yourself and the boat.

We’re two keen travelers who love nature. We didn’t want to live the conventional career-focused life, and we really craved spending time doing what we love, rather than working to pay for things we don’t really need. That drove us, in 2017 to quit our jobs and sail away on our first boat, a little Heavenly Twins 26 Catamaran called Kittiwake. We sailed Kittiwake from the UK to Italy over two years and then sold her to buy our second boat, a Tayana 37 called Skua.

Why did you choose the Heavenly Twins?

The HT has a great reputation as a sturdy seaboat that can handle anything you throw at it. These little beauties have been sailed all over the world in all sorts of conditions, and although small, at 26 feet long, they’re incredibly safe and have a rectangular double bed!

When was she launched?

Where was she built? What do you know about the builder?

She was built in the UK by Aquarius Marine, designed by a well-respected catamaran designer, Pat Patterson.

Tell me a story about your model that you have heard.

We saw a video of a Heavenly Twins in trouble in huge seas off the coast of the UK on YouTube. Once the Life Boat reached the boat, they realised the only trouble was that a person on board had a heart attack, while the owner stayed with the vessel, which was perfectly safe. This little story, however sad it is, really shows how sturdy the boat is.

What’s the best thing about her?

The small rig, which a friend of ours once described as a ‘toy’. It’s actually fantastic: there’s no excuse not to sail on a Heavenly Twins, it’s just as easy to hoist the main or unfurl the genoa as it is to turn on the engine! The ability to dry out is also a plus, especially in the UK.

What is the smartest thing the builder or designer did?

Make sure it was near impossible to capsize her: she just skids sideways, taking you off course, when the rig is overpowered. You’d have to be in some truly incredible weather to flip her.

What would you change if anything?

More headroom, especially as Ryan is 6ft2. Really, he’s too tall for this boat, especially when we had to spend extended periods of time inside. Some later models were built with more headroom, while ours seemed especially low.

Do you have any criticisms of her?

She won’t sail to windward. We knew that perfectly well when we bought her, but we, living on the boat full time, had the luxury to wait for the right weather window. She also tends to splash and slam if the sea isn’t calm. This can get tiring, especially for Elena who struggles to sleep with any noise.

What type of sailing or what cruising ground is the boat model perfect for?

Nosing around the UK’s tidal rivers is fantastic in a little HT, but she equally handled crossing the Bay of Biscay with ease. She is alo a great boat for warm weather, when you can make full use of the deck space.

Is she easy to maintain?

Absolutely, with the small rig and outboard engine, there really isn’t much to go wrong. And each repair is cheap, compared to bigger or more complex boat.

Is she easy to sail short-handed? To shorten sail? Easy to reach the boom?

Other than the sheet winches being quite far apart, she’s a breeze to sail single-handed. The mast step is right at the front of the cockpit, so all problems can be sorted from there. All the sailing is done from the safe centre cockpit.

What’s she like in heavy weather / a blow / big seas

When sailing into the Med, we had a fairly stiff breeze, so she even clocked 9.5 knots over ground at one point. It wasn’t scary, and the small rig certainly helps keep things controllable. The loads on the sheets are never out of control, so everything feels manageable.

Any problems with bridge deck slamming?

Yes, both at sea, and when waked in an anchorage. This is especially a problem as the bed in the aft cabin, where someone has to sleep underway, slams into the sea with the slightest hobby horsing, making sleep difficult for the off watch crew member.

How does she sail in light winds?

Surprisingly well, she is very light, and we had a cruising chute made by a UK company called Jeckells. Because of the small rig, it’s very easy to throw it up or haul it down, even without a sock, so we probably used it more than any other sail on the trip down to the Mediterranean!

How does she sail close hauled?

She doesn’t, she’ll go to about 80 degrees, but nothing beyond that, unless it’s a decent wind coming straight off the land giving a flat sea.

How about on a reach, heading down wind?

Fantastic, particularly as the headsail or cruising chute sheet winches are so far apart, it’s like having a permanent spinnaker pole up, so the majority of sailing is done with the headsail alone, and it’s the easiest sailing you’ll have.

On the bay of Biscay passage we averaged 5.25 knots. That was mostly with a 15 knot breeze on the beam.

There’s a few different options for engines, including inboard diesels in both hulls, but our boat had an outboard in the centre of the cockpit. This will give 4 knots of speed in typical conditions, but if bashing into waves, progress can get torturous. Manoeuvrability is fine for most of what we did, anchoring out with the occasional mooring ball stay, but berthing in marinas can be a little tricky. The plus side is that she’s light, so someone on the dock can grab her and pull her into a berth.

Is she easy to dock, what’s the visibility like?

Visibility is great, the centre cockpit gives an unobstructed view all round, as long as you don’t pile too much stuff on the foredeck.

Very stable in the wind, as the bridle attachment points are so wide, she will sit nose to wind quite happily. But the splashing on the bridgedeck does become wearisome inside the boat.

Is she comfortable down below? Cabins/saloon/galley/heads

As long as you’re not standing up she’s comfy, the saloon has good settees that are comfy and cosy, but unless you’re fairly short, moving around the boat can be tricky, and if you’re over about 5ft 8in, then washing up will soon give you a pain in the neck!

What is the headroom like (hulls or up in salon)?

In most places, less than 5ft9in, but in the heads it’s reasonable.

Is she good for hosting guests?

The big cockpit works well, as long as it’s warm enough to be outside, but inside can be cramped.

How is the storage space on the boat?

Space isn’t the issue at all, there’s plenty, but being a lighter boat, she’s very sensitive to the weight of all the stuff you bring on board, particularly water. We had to be careful about where we stored it and how much we carried.

What kind of modifications have you done and why?

We added better self steering, a tiller pilot that connects to the rudders directly, and a wind vane. For the longer passages, they’ve been essential.

Any plans for further customization?

If you were to swap her for another boat, what would that be? Or maybe you wouldn’t swap her?

After 2 years of ownership and sailing about 3000nm on Kittiwake, we decided to trade her for another classic cruising boat, a Tayana 37 monohull. This was mainly driven by the headroom constraint for Ryan, but being able to sail upwind in the Tayana was also a revelation.

Anything else you would add to help people thinking of buying a Heavenly Twins?

Really consider the headroom constraint, especially if planning on living onboard. Make sure you get on board and look around, and make peace with the splashing noise before you buy. 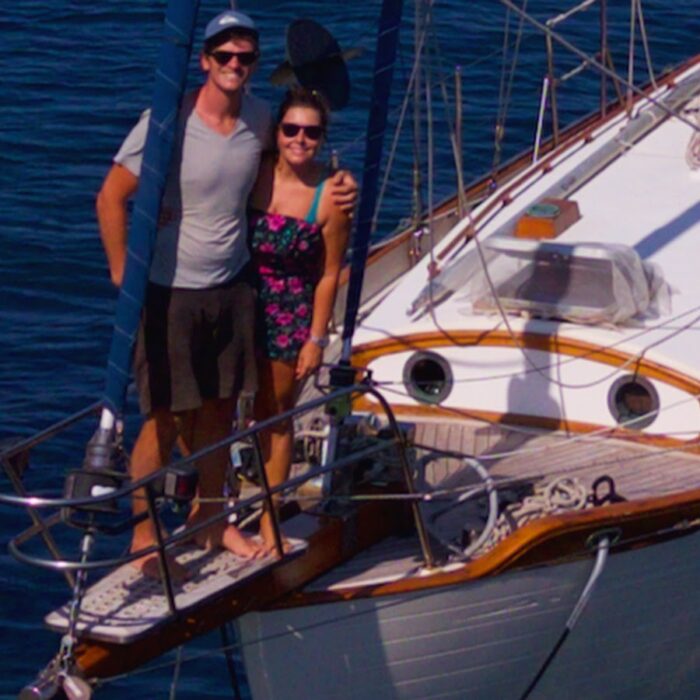 By Elena and Ryan

Chasing a dream, we quit our jobs and moved onto a 26ft catamaran called Kittiwake in 2016. In 2018, we upgraded to Skua, a Tayana 37. Not wanting to wait until we're old and better off, we decided to start our adventure now, while we're still young. So with a tiny budget, we're following the ethos of a small boat, a frugal life and a rich experience.

Hi, Elena & Ryan . We have just bought Kttiwake from Max , I am 73 and a little disabled and my wife is 61 . I have sailed since I was 7 years so have salt in my blood , have sailed all over the place incl the first ARC . To stay sailing in later years we have purchased Kittiwake and hope to enjoy her.
Think the only thing which will get through to me is slapping at anchor , did you ever have any ides how to reduce this ? I was thinking of poss. inflating two tubes under the bridge deck at anchor , may take half an hour but could be worth it for longer stays , could be deflated quickly if you need to leave in a hurry . one question for you do the voltage controllers go in to trickle mode when left to avoid damaging batteries
Should get on well as was engineer and built/ renovated 14 boats over lifetime . All the best to you both , we very much enjoyed you videos
David & Lynn

Nice to read you. We’ll reply in private; hope you don’t mind.