What does Jeanneau want the world to think with the acronym of “CCC” In the title? It’s the Coastal Cruising Catamaran. That’s it. Jeanneau was so transparent about the capabilities of their new cat, that they put it in the title. Thinking about racing to Bermuda? Look elsewhere. Designed by notorious sailing and design guru’s, Gino Morrelli and Pete Melvin (America’s Cup & Olympics), they chose performance over comfort.

To understand the boat, I really needed a quick history lesson on Jeanneau’s production timeline. In 1984 they started production of their first generation Lagoon boats. They started big too. The Lagoon fleets of 55, 57, 67 and 67s models were the first boats that were splashed starting from the mid 1980’ up into the early 1990’s. Beginning in 1992 the production of any new models stopped. Looking back into the history glass, one can see the writing on the wall. So after some time with no activity, in 1995 Jeanneau launched the Lagoon 35. All eleven of them and then was bought out by Beneteau Boats. It was the last Lagoon boat to be built with the priority of performance over comfort. Since then, more than 5,000 boats have been produced. They’re widely known as a durable and reliable vessels and many were sent to sail with countless charter companies located around the world. Moon Tide, along with her captain, Bill, has been kind enough to let me board and do an interview. The two have been sailing the east coast “for longer than you have been alive,” Bill states. I’m 36 years young, so maybe not that long, but long enough.

The boats handling and performance were definitely top priorities when designing,” Bill informs me. “Even in light winds, Moon Tide sails around 6-7 knots. When we get into some wind blowing true 12-15 knots,” he says, “10 knots of boat speed or more is possible. I’ve even seen 12 knots hold on the screen for a while.” Impressive I’m thinking. From research and discussion, the reason Lagoon 35’s can easily hold high single digit boat speeds, even in horribly light wind is with a big thanks to the light displacement of the hull( counter-acting the quite conservative a single-spreader rig which holds a smaller sail plan totaling 620 square feet, including the roller furling jib.) Like its 37 and 42 foot sister ships, the Lagoon 35 CCC is built in the USA by TPI, using their proven SCRIMP resin-infusion process, incorporating biaxial glass and a balsa core. Jeanneau’s 10 year blister and five year structural warranty was and is one of the best in the boatbuilding business. The designers, known as “M&M” have made handling this boat very easy.

Coming aboard, one cannot miss the large windows on the sides of the saloon which Lagoon’s are well known for. She has an average beam of 15’9”, which allows for easy access around the deck. The helm is loaded with the standard instrument array, auto-pilot, gauges and engine controls, with plenty of seating. All your lines, halyards, sheets and reefing lines, all lead aft into the cockpit. Also, nicely placed aft, there are four self tailing winches, offering an excellent shorthanded sailing experience. Three winches are standard; Bill installed the fourth, providing alternative purchase when needed. And believe me, there’s no shortage of space. Just gazing around, I see an ordinary catamaran. No Frills. The boat is very tidy and clean, for being close to three decades old. All the hardware is Lewmar and looks to be in good condition. Being on a boat, one out of 11, is pretty cool. The First thing that catches my eye after boarding is the amount of deck space and Jeanneau’s classic molded-in transom steps, for an easy boarding or swim. Forward on deck, sunbathing can be enjoyed by all, while lying on then trampoline between both hulls, free and clear from lines and sails.


Moving past the cockpit into the saloon, fitting a crew of four perfectly, you can see that a lot of thought was put into the design. The split level, “Galley Up” layout and the two piece dining table with the L-shaped seating (optional extra bed), keeps company together while underway and on the hook. The huge windows provide the inside with a lot of natural light. The galley is equipped with a refrigerator\ freezer, two-burner stove with oven and a very nice, large sink. Standing there, I feel like I am in a much bigger boat with the spacious layout. Built with two big queen berths aft and a quite large and impressive head in the starboard hull, I’m surprised at the headroom, 6’3”. That definitely adds to the spacious feel. There are 4 different layouts to choose from. Bill’s boat has a large berth forward, in the port hull with a small head attached. A custom, in-house re-fit. Right now, it appears to house all foul-weather gear and spinnakers. However some of the other layouts one can choose from, offer the port hull with a second custom berth and head, single berth with storage, workshop or it could be left unfinished for later design. Living aboard? There are so many gasketed lockers\compartments you can bring everything, but leave the kitchen sink.

Moon Tide is powered by twin Yanmar diesel inboards, larger engines are optional. The twin drives allow for the boat to cruise at 7-8 knots and maneuver in tight spaces with finesse. I asked Bill his thoughts overall on the boat and to sum up to me his overall take and what he said was simple, yet sufficient; he said, “The 35 CCC is very simple to sail and operate”, “it changed what I thought was possible in 35 feet of waterline. This boat is perfect for my wife and I.” he says. “It is lots of fun under sail, fast, has plenty of comfort when the hook is down, and I have had no major issues with the boat, so, I am happy”. Bill goes on to tell me that since his purchase of the boat, he has not wanted to change or modify anything. Besides adding a few creature comforts, the boat is the same as the day he bought it. He mentioned to me that on a few occasions when the boat has been loaded down heavy the seas can hit the nacelle and be loud with the occasional banging in-between the hulls. Her under-wing clearance is about 2’ un-loaded, so she seldom smacks the top of a wave. In addition to the generous clearance, the surface of the under wing is fair and devoid of anything that may snag waves and slow the boat.


The Lagoon 35 combines an excellent layout and a high quality finish with the capability of sailing pretty darn fast. She offers her crew livability and affordability in a stylish, stable platform that also has the benefit of a moderate beam of 15’9”. Being able to venture into shallow depths, with a mere draft of 3’3”, one can go where no mono-hull sailboat may dare. 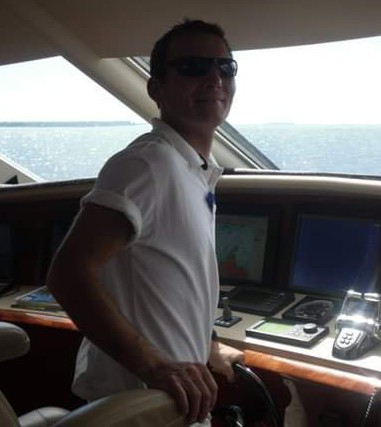