In 2002 Knysna Yacht Company (pronounced “Knees-nuh”) set out to become a boutique builder for high quality, semi-custom catamarans. Building on the legacy of the South African catamaran industry, the company purchased the tooling for the Angelo Lavranos designed St. Francis 44 hulls. Then Knysna changed the cabin and interior layout and the weight balance to launch their own take on the cruising catamaran.

The Knysna engineers found that the St. Francis 44, a successful cruising design, still had room for improvement in areas of interior volume, cabin height and weight distribution. The original design had center engine placement in the hulls, but the Knysna team moved the engines towards the stern and added a small stern scoop to to increase sea kindliness and motion. Moving the engines aft gave the new team more space to work with mid-ships in each hull and gave the boat more lift in waves, offsetting the relatively low bridge deck.

Above the waterline, they increased the headroom from the original 6’2”, making the interior much more comfortable for taller sailors. Walking around inside, the Knysna 440 doesn’t feel cramped, though hulls are narrower than other boats in this class.

Behind the concept of the Knysna Yacht Company is the idea of a custom build-out for each customer. The buyer can choose from several workable options for cabin, hull, head and main saloon layouts, which they tailor to specific requirements. Each boat is a little different inside, both by design and customer choice.

The Knysna 44 we visited for this article has two galleys, which at first glance seems unusual for a cruising yacht. But she’s sailed by a couple who do not need the extra staterooms for children and many overnight guests, and the dual galley setup gives many nice options for life on board. Cabinet space and storage is large and well thought out, with some cabinetry shared between the spaces. Refrigeration is plentiful, and they can split cooking and cleaning tasks between the galley spaces. Entertaining on board is easy, and they can move dishes and gear out of the upper galley to deal with later.

With a 24” bridge deck clearance, the Knysna 44 has taken a few slings and arrows from reviewers and commentators about how it is too low and will pound a lot. The real-world experience with the boat is different, according to owners. The boat we toured sailed from South Africa to Australia, then through Southeast Asia and on to New Zealand.

Most sailing between Australia and South Africa is East to West–from Australia to South Africa. To get more favorable winds going the opposite way, you dip down into higher latitudes into the Southern Ocean. That’s not a part of the world known for flat seas, and her owners say the Knysna 44 handled it without lots of pounding and slamming–no more than you’d see on any boats in the hairier places to sail!

The lower bridge deck also allows for a lower profile overall, reducing windage and side slipping. Performance-wise, this puts the boat in the middle with better upwind performance than many taller and heavier catamarans, but without the complexity of sailing high performance cats with dagger boards which consume interior volume. As a lighter boat, it responds to weight and loading and it will sail better when loaded to design specifications.

Looking under the bridge deck, Knysna has added some flanged surfaces to the bridge deck entry, to break up the shape of solid waves a little when they hit the hull. It seems to work, as one owner states he’s spent over 4,000 days on his boat without ever experiencing hard slapping and slamming from the lower bridge deck.

The Knysna 44 is a tough boat, their record in circumnavigations and in the Southern Ocean confirms this. Build with an Airex foam core, the hull is hand laid vacuum-bagged Vinylester, giving it high strength and lighter weight.

When I asked the owners of this Knysna why they bought her over any other South African catamaran, the response was , in essence, “The Company.” Back in 2006 and 2007, when they were exploring boats to buy, it was a seller’s market and many catamaran makers had waiting lists and weren’t responsive to buyers who weren’t ready to put down a deposit. Economic changes shook up the industry, but Knysna was responsive and customer focused even before the downturn.

And twelve years later, the company is still there for them. If they call or e-mail with a question or concern, Knysna Yachts knows who they are, knows their boat, and is right there to help over a decade after the sale of the yacht. If they won the lottery for a new boat, these Knysna owners would go back to the same company for the management and support as much as the quality.

The helm layout gives access to all sail controls so a single watch skipper can handle the boat without help. She’s easy to sail shorthanded, and you need an extra pair of eyes on deck more often than you need a second pair of hands. Next to the helm is access to a cabin where off-watch crew or the skipper can sleep and still be within earshot if help is needed on watch.

In ideal conditions (like broad reaching in twenty-five knots in normal seas) the boat can sustain eight to ten knots, though overloading can slow you down. Paired twenty-seven horsepower engines are enough to move this relatively light boat around seven knots.

The Knysna 440 is a well built, good sailing, and comfortable boat from a company which stands behind its work. Though every boat has compromises, the Knysna 440 makes some better tradeoffs to keep both performance and comfort good and competitive with any boat in its class. 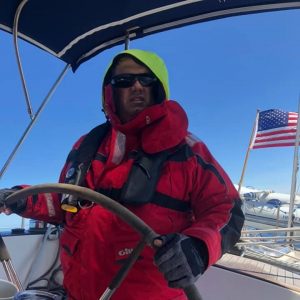